October 17, 2013
After borrowing the appropriate kit from DAT we set after creating the technical side of the system.
We used the following components in the process:


The first thing to get working was the RFID reader. Using the reader's Arduino library I managed to get the reader reading the two RFID cards reliably and wrote an identification script. This script named the two cards and handled check-ins and check-outs, along with letting the person who scanned the card know if their 'friend' is also checked in. I added in a couple LEDs for visual feedback. Here's a demo of it in action:

Once this was done it was time to begin connecting the wifi. After many, many technical issues with the wifly shield I decided to try an ethernet shield instead, which worked great. Much testing was done to test the connectivity's robustness. However for reasons I couldn't figure out the connectivity was lost after sending data between 4 and 6 times. I tried much to solve it, but ended up putting it on hold to priorotise other aspects of the development process, as it would work long enough for the demonstration. I set up a webserver with a MySQL database. A PHP script would act as a handler for the incoming data from the Arduino. Finishing on the script I managed to get the Arduino to modify values on the online database, and display as a JSON object on a live-updating front-end interface. Here's it working:

While this doesn't look massively impressive, if you look in the background you can see the [checked] values under Bob and Steve changing between 1 and 0 as I scan their cards. This was all online and live.

The next step was to create the front-end user interface. Jamie knocked up a pretty nice looking lobby interface that showed all the simulated users of this system, including Bob and Steve, the demonstrated users.

Once this was done Jamie created the HTML version, which you can see online here: http://302.siddv.net/. This link shows the final outcome of the webapp. As you scan the cards, the webapp checks-in an checks-out both Bob and Steve, depending on the card scanned from the fountain zone.

After this it was time to do the physical portion of the system. The spatial designers had created this lovely model of the proposed space, with some nice looking zones: 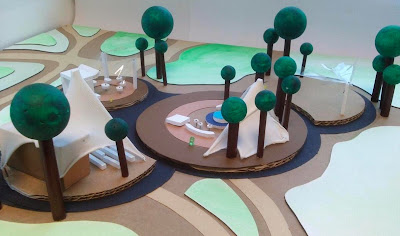 The next step of was to integrate the developed ELDR system into the model. We had planned to integrate LEDs into the model (which you can see in the picture), which light up telling you where your friends are. Jamie and I managed to fiddle around and precariously wire and solder all the LEDs in. I hooked them up to my breadboard & the circuit and, hey presto, it worked!

So now we had a system that had some LEDs light up, telling the user where their friends are on the physical model, and checking them in and out via an online system. For effect we added a buzzer to produce an audible jingle whenever the user logged in and out. Here's the final result with everything wired up in place: 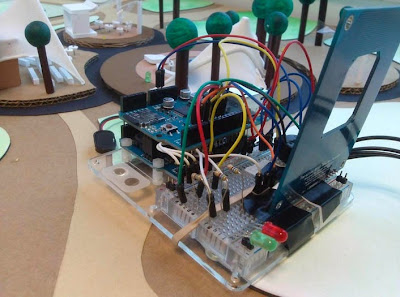 The system was finished, but there was still work to do. Beth designed some kick-ass cards for our system, which we stuck the RFID tags inside:

Matt designed some 3D mockups of what the system terminals may look like, with each representing a different zone, and the larger one representing the entrance to the park. Beth also did a sketch of one in use: 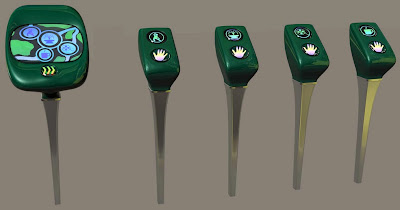 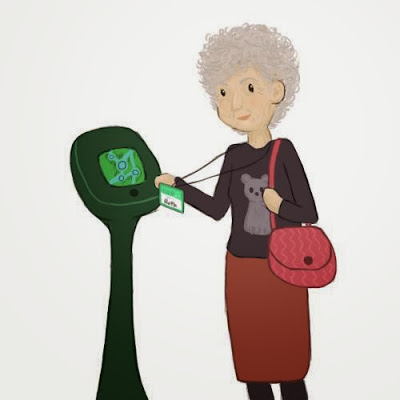 This was the last stage in development, and we were all pretty satisfied how the project turned out.