Modding a killswitch into a wired Xbox 360 controller.

May 17, 2016
I haven't posted anything here in a while, and have amassed a rather large number of undocumented projects over the last year and a bit. To kick myself back into gear I figured I'd document this 360 controller mod I did recently.

As a little background: I game on PC and own both a wired 360 controller and a flight stick. Having both my 360 controller and flight stick plugged into the PC at the same time causes deadzone drift on flight sims and Elite. This basically means that my aircraft will never fly straight, unless I unplug the 360 controller. Now that's fine, but location of my usb port requires me to lean over slightly to unplug it. I'd rather not have to constantly lean over unplug, and plug the controller back in whenever I want to play a game with my flight stick.

So a solution for this was to wire a switch into my controller so I could simply cut the USB data wires to essentially emulate an unplug. The controller is pretty well engineered, so finding a place to put the switch where it there would be enough internal space, and wouldn't get in the way externally was a challenge. The only realistic spot I could find was on the backplate between the two shoulder buttons. So I drilled a hole, and used a dremel to clean up the area for a better fit. 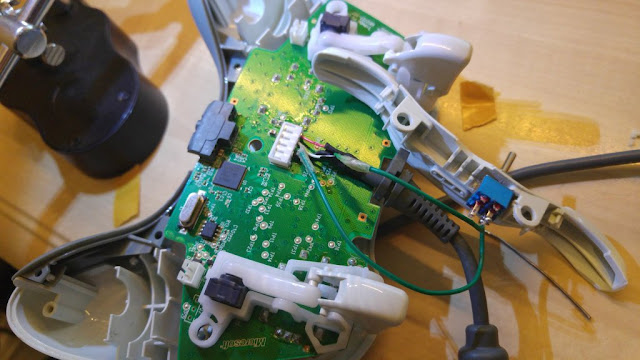 The wires from the USB lead that matter are the green (data +) and white (data -). Initially I was planning hooking up both data wires to the switch, but I figured that just wiring up one should be fine, as it still breaks the loop.

I cut the green wire. I found a couple green jumper leads, so I cut them to length and stripped them to length. Finally I soldered everything together and gave it a quick test. After I confirmed it worked I closed it all up again. Here's the final result: